“The Grow” would be Florida’s first planned Agrihood, but many local residents are apposed to the development.  They cite that the planned development (that would house 2,256 homes over 1,237 acres) would severely alter the built landscape of the primarily rural area just east of Orlando along East SR 50.  They also state that such a large development would add further congestion to local roads, something the current transportation infrastructure would be unable to handle.  Developers are supposedly willing to provide upwards of $26 million that would be allocated to transportation infrastructure upgrades, thus reducing congestion from increased local residential density.

Local residents that are “for” the The Grow have discussed how the housing is needed in an area that is in close proximity to the expanding University of Central Florida and Central Florida Research Park.

The Grow, if developed, is planned to feature sustainable farmland, and as has been promoted as a “Farm and Garden Community”.  My first thought when looking at the potential site plan is whether this development can actually be called an Agrihood, as less than 1% of its total developable area is planned towards agricultural uses.  According to the plan, there is 805 net developable acres, with 6 acres planned for farms.  181 acres are allocated to wetlands/ponds, while nearly 500 acres are allocated to residential housing.

At first glance, this seems more of a marketing spin to get development approval from the County.  Do we really want to water down new development and planning terms before they have even caught on?  It will be interesting to hear over the next several weeks what occurs at County Hall and the decisions that are made on this development. 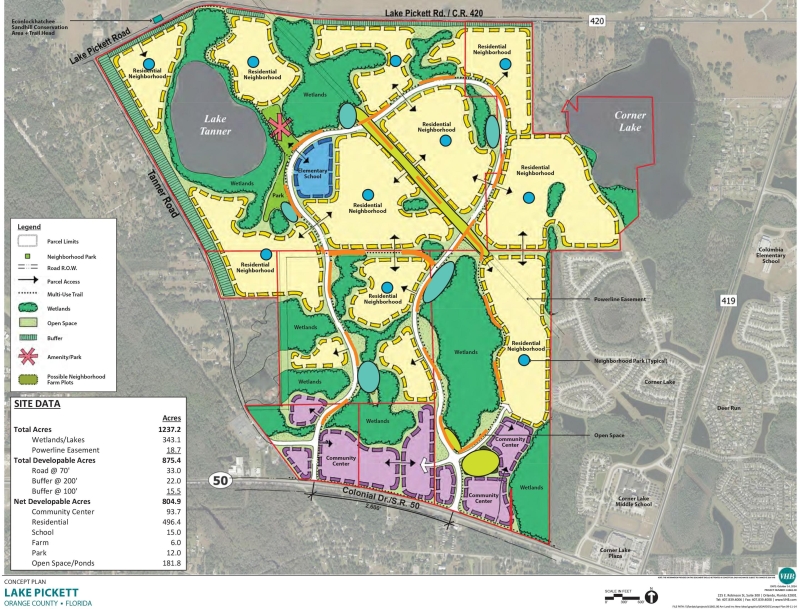